Inspired by the trends of Autumn/ Winter 2016/17 seen recently, our latest collection has a real Fairytale ending. The products in this collection have been carefully curated to add a dramatic alternative to the themes of next season's fashion, with all the quality and individuality of vintage.

For Fall 2016 we're seeing clothes straight from a storybook, with romantic ruffles, Victorian and Renaissance influences, heavy folk touches with embroidery all culminating in a magical, sparkling look straight out of a storybook. Of course, the overarching theme of fashion trends for AW16 is, as it was for the last few seasons, the 1970s, with maxi lengths, embroidery, brocades and velvets all being features of 1970s vintage clothing - so a lot of this collection will include a lot of 70s, but we have a great mix of eras too.

One of the biggest influencers on our fairytale collection has to be Fendi, whose 100th Anniversary collection was undoubtedly one of the most memorable we've seen this year. Even the setting, the Trevi fountain was otherworldly. As seen above, Fendi's AW16 collection is heavily influenced by fairytales and this particular dress bares a striking resemblance to our Art Nouveau maxi dress by David Gibson of Regent Street, an enigmatic label that produced beautiful, high quality clothing during the era that London was in full swing and paved the way for global fashion at the time. Both of these dresses excellently show how the fairytale theme can be both bold and sophisticated - you don't necessarily need all the frills and ruffles seen lately. 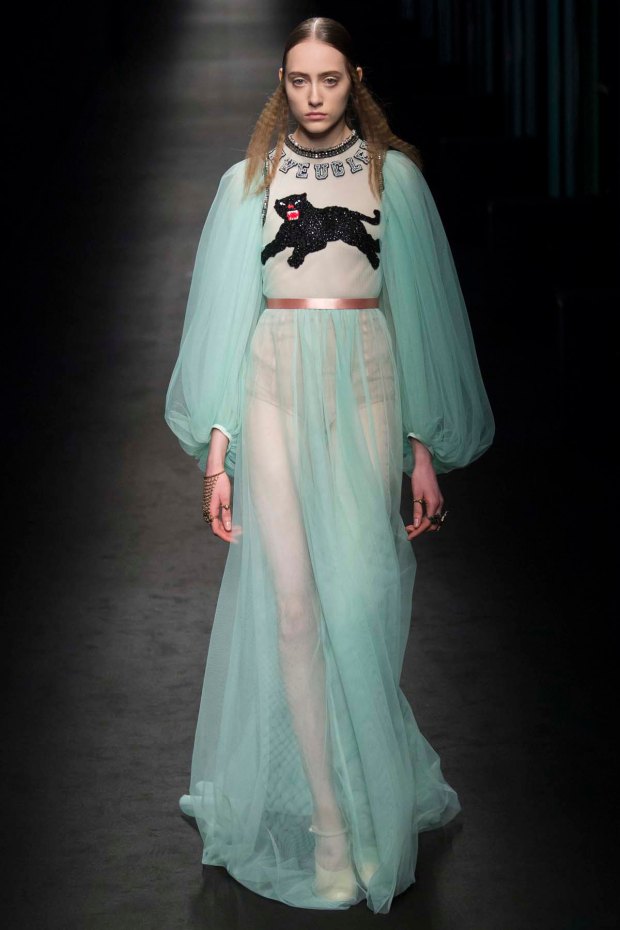 These Gucci dresses are magnificently fairytale

If you do love ruffles however, the fairytale collection is certainly for you. Our Hanae Mori dress seen below has perfect ruffled sleeves in pastel tones that conjure up such romance. Our Ungaro dress has a slightly more Victoriana feel, with gold lace, velvet AND taffeta - a truly maximalist approach to the fairytale theme but with a French elegance.